I like Windows. I have been using it since XP days (let us forget that Vista ever happened). I’m also a software developer, and as much I hate saying this, developing in Windows can suck.

I have recently started getting into ember.js using ember-cli. I loved how easy it is to get started with it and being able to create new parts of your project by simply typing something like ember generate controller foo. But in Windows, the experience is a bit different…

This sets up a LiveReload server that is listening for our changes to the code, and if there’s a change, the browser automatically refreshes the page. This tightens the development loop.

So if we edit our route template, we should see output on the terminal

That’s cool right? But as you can see it takes a whole 3 seconds before you actually see the change on your browser. This isn’t a very fast and it gets worse the more changes you make to your project.

The ember-cli developers are awesome but the speed problem is an issue with the way symbolic links are handled in Windows, you can read more about it in this GitHub issue.

There are a few solutions recommended on the ember-cli documentation. I tried all them, but I still suffered from slow compile times.

I thought it was over, I didn’t have the patience to wait 3 seconds everytime I made a change. Sure it may not be a long time, but I had a similar setup in a different project using gulp.js and the wait was close to none. I just couldn’t do it.

I didn’t want to use Linux either, not because I’m afraid of it but because WebStorm looks like poop in Linux. Petty reason, but important to me.

Even though I said I didn’t want to use Linux, I did so anyway. I set up an Ubuntu VM on VirtualBox. Installed all of the stuff necessary to get going and it was way way faster.

But it just looked too ugly.

I was at a bind, ember compiles flawlessly in Linux but the IDE looks horrendous, but it looks just fine in Windows but the compilation process is a pain. I needed a hybrid solution.

The solution was to use Vagrant to spawn a Linux VM that is running a Samba service that exposes a network folder that both the Windows host and Linux guest can access.

The Vagrant VM will compile the changes that are made to the ember-cli project and I can edit the code on my favourite IDE!

To get this setup working, you’ll need to have Vagrant and VirtualBox installed. Here’s the Vagrantfile I’m using:

This will tell Vagrant create an Ubuntu 14.04 VM and give it a static IP. In addition, this also tells VirtualBox to forward two ports from the guest to the host. So ports 4200 and 35729 will be accessible via http://localhost:4200 and http://localhost:35729.

Run vagrant up and this will set up your VM and you’re ready to start installing dependencies.

By this point, your VM should already be running and you should be able to ssh into it by running vagrant ssh. Once you’re in, you need to run the following commands as sudo to install the dependencies needed:

This section is a bit more involved as we have to edit a configuration file and run some crazy commands, but let’s get started. So first of all you’ll need to edit /etc/samba/smb.conf to have the following contents:

This is going to be the Samba configuration that we need to access the files from Windows. If your WORKGROUP is different, make sure to edit it otherwise leave as-is.

Next we need to create the folder that we want to share and give it the proper permissions. Run these commands using sudo:

Next we need to give our samba user,vagrant, a password:

Finally, we must restart the samba service:

Optional: You may want to create a symlink to the ember-workspace into your vagrant home

We’re almost there, all we need to do now is authenticate against our Samba server. Open a new explorer.exe window and the network location. If you followed the defaults it’l be named EMBER-SERVER.

Double-clicking on the network location will reveal the share, ember-workspace. Trying to open that will bring up a login prompt, in which you’ll type in the user vagrant and whatever password you chose when running the smbpasswd command. 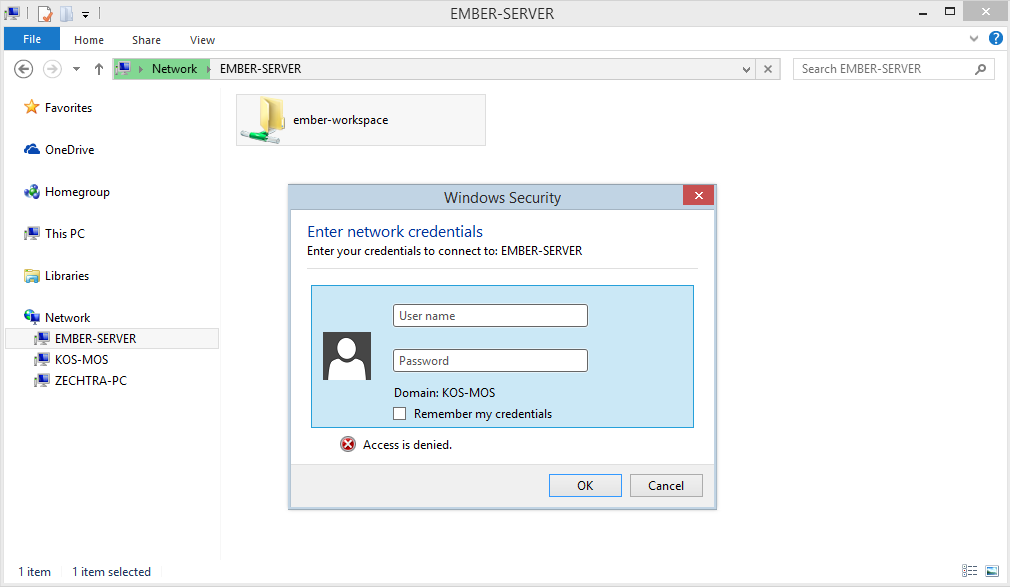 Once you authenticate, you can choose to mount the drive and use it as if it on your local drive.

Running the same application from my initial experience resulted in this:

I don’t know about you, but this is very awesome! This is a very long process, so I’d recommend you fork my project in Github that’s ready to go.

As with anything I touch, nothing every works 100%. I’m having some issues with Webstorm being a bit slow on indexing and being able to realize that files have changed. If anyone has a solution for that I’d greatly appreciate a note or comment below.